Did you know there are two Natural History museums in the UK? There is the famous, South Kensington one, but there is another outpost of this most famous of child-friendly of museums in a small Hertfordshire town. The Natural History Museum at Tring is less famous than its larger sister in London, but we still thoroughly enjoyed a day out there on a rainy Saturday.

Disclaimer from the off: if you’re not keen on taxidermy and natural history specimens, this is probably not for you. I’m really not keen on anything stuffed  just for decoration, but it feels completely different to me if it’s for a scientific purpose.

The collection at Tring came about in the 19th century when a member of the hugely rich Rothschild family, Walter, decided to build a natural history museum as a child – as you do – and was given the land and money to do just that on his 21st birthday. He built up one of the largest private natural history collections in the world, which was then gifted to the nation and is now part of the Natural History Museum. On a side note, he also taught zebras to pull his carriage.

The building where he founded his museum is still open to the public. It is simply the best day out if you’re one and are obsessed with animals, as Felicity has been pretty much since we knew she could be interested in anything. We first discovered her love of stuffed animals in the Castle Museum and Gallery in Norwich last year, so thought Tring might be a hit. I’m not sure we have ever seen her more excited at being able to get nose to nose with a polar bear though. She was literally running around shrieking with happiness at all the different exhibits (apologies to anyone visiting on the same day we did!) 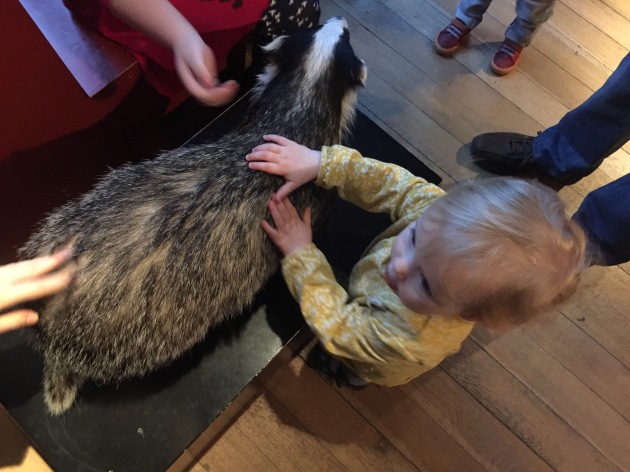 The museum is free to enter and is reasonably small, spread over four floors. It still feels very Victorian and the specimen drawers look like they are the originals from Walter Rothschild’s day. Unlike the London museum there are no dinosaurs, but being able to stroke a stuffed badger more than made up for that in Felicity’s eyes!

There is a cafe within the building but it is tiny and doesn’t have the widest choice so we walked to Tring High Street, which is a couple of minutes away and had lunch there instead. The cake did look good in the museum cafe though! If you wanted to bring a picnic there are lots of places to eat outside, but as you can see from the rain sodden butterfly sundial, it really wasn’t eating outside weather when we visited.

Very helpfully there’s also a free cloakroom where you can leave buggies and cloaks. We caused enough chaos with out toddler running underfoot to go and gesticulate at the latest exciting specimen she’d spotted without blocking people with the buggy as well!

I would thoroughly recommend it as a slightly quirky museum if you’re ever near Tring. We will definitely be visiting again. I am loving doing the #take12trips challenge from Need Another Holiday as it encourages me to discover some local places I’ve never explored.

The colours today. I love gorse - someone once told me it’s the suncream plant because it smells of coconut. Even in January! #nofilter #signsofspring #gorse
Smug face 😳 Complete with daft hat. I dragged myself to go swimming even though I had forgotten my goggles (I wear contacts so need them to protect my eyes) and it was just before lunch so I was a bit hungry. I pushed through and had a lovely swim. I don’t really do New Year’s Resolutions but the pre Christmas run up nearly sent me demented with stress so I was determined to carve out a little time to get fitter. Swimming is the only exercise aside from hiking (which by its nature takes a lot of time and we’re not in the ideal place in very flat Bedfordshire 😂) that I enjoy. Weirdly since becoming a Mum I have always felt a little guilty about carving out the time to swim. Which I realise is ridiculous. I read a really good article about how basic human stuff - like haircuts, exercise, having a bath - is seen as being a very naughty treat for mothers by all the #metime and #selfcare hashtags. This week is supposed to be when most people ditch their New Year’s resolutions and although I think that January is not the most realistic time to make life changes, I’m hoping that my swimming is starting to become habit. 🤞🏼
Wasn’t the weather glorious this weekend. Super cold but super sunny. Had the most lovely Saturday meeting up with one of my very best friend’s who now lives at the other end of the country. We met half way between her Mum’s house and us at the wonderful Belton House. I’m not sure if have ever been to such a fabulous National Trust property for kids. There’s an indoor play area, a massive playground (and I mean massive), even a little train. As well as the more usual lovely National Trust views. It’s a bit of a way from us - took us about an hour and twenty minutes - but I think we’ll have to visit more often. #daysout #ukexplore #daysoutwiththekids #showthemtheworld #exploringtheworld #takethekids #familyadventure #familyfun #travelkids #wearetravelmums #instatravel #familytravel #letthembelittle #outdoorkids #nationaltrust #lincolnshire #beltonhouse
Little one is over the worst of the pox, although very spotty she’s now got most of her energy back so today we went for a walk in the woods as a place unlikely to meet anyone if she’s still infectious. We bought our house mainly because it backs onto woods but until we tried geocaching there last week the woods were considered the dullest of the dull by the kid. We’ve had such lovely chats when we’re walking though I hope she’s coming round to the idea that it’s a nice place to be. Here are some from various wanders. #woods #intothewoods #exploringtheworld #geocaching #outdoorkids #freerangekids