As I mentioned in my 2016 post, last year I didn’t do very well at concentrating on my hopes rather than drifting into making-myself-feel-slightly-guilty resolution territory. Feeling bad because of a date on the calendar isn’t something I really want to do deliberately! At the same time the turning of the year is still the main benchmark of time passing, along with birthdays and anniversaries I guess (and my birthday is pretty much at the end of the year so all gets bundled together anyway!) so I still like to mark it. 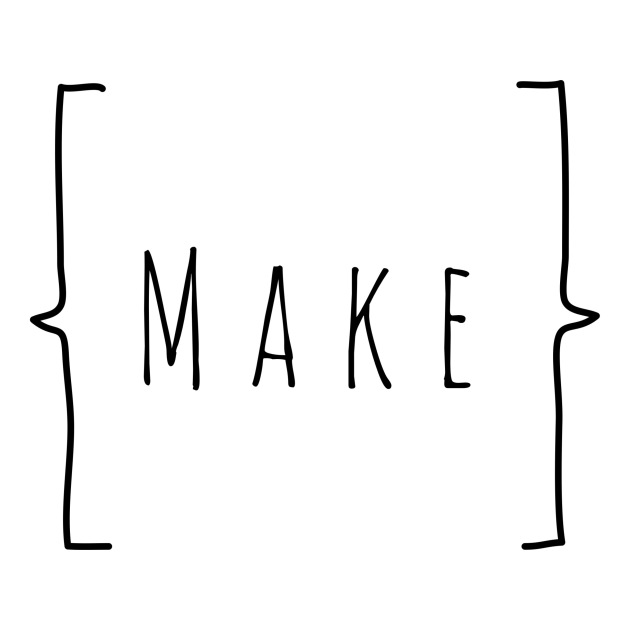 I’ve seen lots of people choosing a word to sum up the upcoming year for them. I think this started with this email course, which I confess I haven’t done. ‘Make’ just kind of came about organically. I started off trying to write about my hopes again and the post just wasn’t working, although I realised that every one of my hopes revolved around making, so much so I was trying to find synonyms so I wasn’t overusing ‘make’. This seemed to be a good indication it is something I should focus on this year.

I want to make by crafting more – if I’m making something (anything) I’ll be happy. I’ve already kicked this off by starting to use up various craft kits I’ve never used. I’m not worrying about what I’ll do with the finished item, just enjoying the process and making some space in the cupboards too. I’m also looking forward to starting to do some basic crafts with Felicity – she’s just starting to enjoy scribbling and I’m looking forward to some crafty fun with her this year.

It’s also about making the most of time this year. I find that my ‘free time’ is limited – on a good evening we get around an hour and a half after Felicity is in bed to relax. Often we have chores or life admin to be doing, and on the bad nights she wakes regularly and I’m up and down stairs all evening. It’s too easy to sit and mess about on the internet rather than actually making the most of my time – by crafting, reading or putting a little thought into really enjoying our downtime (otherwise known as hygge).

It’s also making time to do fun stuff with Felicity and engaging with her properly. I’m aware that sometimes my phone is too much of a distraction, I don’t want this to be the case. I’m not going into a smartphones are evil rant as they’re not. Having busy whatsapp groups constantly chattering is a wonderful way of feeling connected with the people I like best. But I probably don’t need to check Facebook twice an hour (especially as I don’t often post) to get that connection. Not frittering, not being super productive, just making the most of my time.

Another element to ‘making’ is that 2017 is the year where we’ve got to get a lot done on the house and make it into even more of a home. We need a new kitchen, which is going to be a huge project and will be one of the first (and definitely the most expensive) way of putting a permanent stamp on our house. I’m hoping to continue getting pictures on the walls, as we still have things propped up on the dining room floor – two years in is getting silly – and generally just nesting.

I’m really looking forward to seeing if using a single word like this is going to be something I enjoy thinking about over the year too. We’ll see how it’s gone this time next year!

The colours today. I love gorse - someone once told me it’s the suncream plant because it smells of coconut. Even in January! #nofilter #signsofspring #gorse
Smug face 😳 Complete with daft hat. I dragged myself to go swimming even though I had forgotten my goggles (I wear contacts so need them to protect my eyes) and it was just before lunch so I was a bit hungry. I pushed through and had a lovely swim. I don’t really do New Year’s Resolutions but the pre Christmas run up nearly sent me demented with stress so I was determined to carve out a little time to get fitter. Swimming is the only exercise aside from hiking (which by its nature takes a lot of time and we’re not in the ideal place in very flat Bedfordshire 😂) that I enjoy. Weirdly since becoming a Mum I have always felt a little guilty about carving out the time to swim. Which I realise is ridiculous. I read a really good article about how basic human stuff - like haircuts, exercise, having a bath - is seen as being a very naughty treat for mothers by all the #metime and #selfcare hashtags. This week is supposed to be when most people ditch their New Year’s resolutions and although I think that January is not the most realistic time to make life changes, I’m hoping that my swimming is starting to become habit. 🤞🏼
Wasn’t the weather glorious this weekend. Super cold but super sunny. Had the most lovely Saturday meeting up with one of my very best friend’s who now lives at the other end of the country. We met half way between her Mum’s house and us at the wonderful Belton House. I’m not sure if have ever been to such a fabulous National Trust property for kids. There’s an indoor play area, a massive playground (and I mean massive), even a little train. As well as the more usual lovely National Trust views. It’s a bit of a way from us - took us about an hour and twenty minutes - but I think we’ll have to visit more often. #daysout #ukexplore #daysoutwiththekids #showthemtheworld #exploringtheworld #takethekids #familyadventure #familyfun #travelkids #wearetravelmums #instatravel #familytravel #letthembelittle #outdoorkids #nationaltrust #lincolnshire #beltonhouse
Little one is over the worst of the pox, although very spotty she’s now got most of her energy back so today we went for a walk in the woods as a place unlikely to meet anyone if she’s still infectious. We bought our house mainly because it backs onto woods but until we tried geocaching there last week the woods were considered the dullest of the dull by the kid. We’ve had such lovely chats when we’re walking though I hope she’s coming round to the idea that it’s a nice place to be. Here are some from various wanders. #woods #intothewoods #exploringtheworld #geocaching #outdoorkids #freerangekids